Need a nature fix? We take look at some of Hong Kong’s best country parks, marine parks and more: where they are, what’s interesting about them, what you can do when you’re there, and other fun facts.

Location: Along the far northern boundary of the New Territories This area is home to one of HK’s seven MacIntosh Forts. These forts were built between 1949 and 1953 in an effort to stop illegal immigration across the border. They take their name from the Police Commissioner of the day, Duncan William MacIntosh, and are Grade 2 historic buildings.

Location: In Yuen Long, in the far northwest of Hong Kong The park is home to Pui Pui, Hong Kong’s famous saltwater crocodile. Captured in 2004 as a four-year-old in the Shan Pui River by the Agriculture, Fisheries and Conservation Department, Pui Pui was first homed at Kadoorie Farm, before coming permanently to the Wetland Park in 2006.

Location: In the heart of the New Territories To the north of Tai Mo Shan is another smaller peak, Kwun Yam Shan, which is home to a number of “hot pots” (some of them signposted); this is the local name for fissures in the ground that emit warm, moist air from below the surface. They’re sometimes referred to colloquially as “dragon’s breath”.

Location: The New Territories, east and northeast of Sai Kung A part of Hong Kong’s Geopark overlaps with Kiu Tsui Country Park. Lying just off the coast of Sai Kung, this is Hong Kong’s smallest country park (1 square kilometre) – but it packs a punch, as it includes Sharp Island. The island has what’s known in geology as a tombolo, a natural sand levee that connects to a smaller island, Kiu Tau island. It’s only visible at low tide, at which time you can stroll the 250 metres to the other side.

Location: South side of Lantau Island This country park is home to several of Hong Kong’s rare fauna, including the barking deer (actual name: Northern Red Muntjac), which hides deep in the forested slopes, and the cute and quick-moving Pallas’s Tree Squirrel. 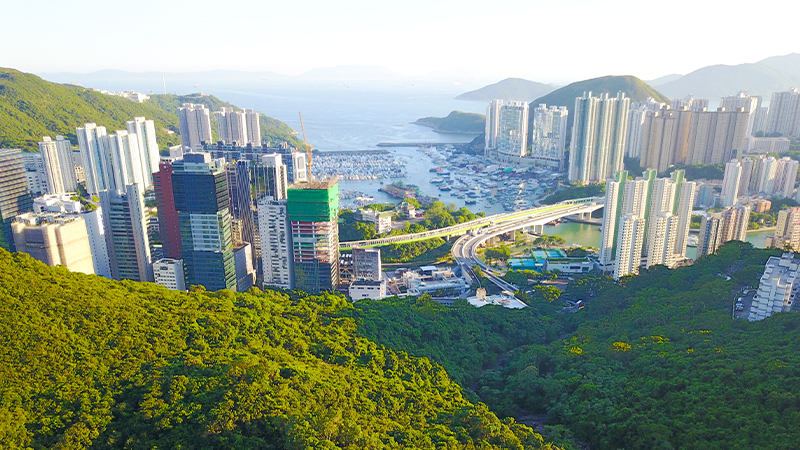 Aberdeen Country Park is home to many of Hong Kong’s black kites. Come at dusk and you’re likely to see the birds of prey beginning to roost for the night on the trees. There have been pangolin sightings here, too, though you’re more likely to see the park’s ubiquitous wild boars (sniffing around the rubbish bins near the barbecues, most likely…).

Hong Kong is also home to half a dozen marine parks and reserves, including the following three.

See more in our Things to do section