Lara Sage tracks down a handful of lodges and resorts that offer a unique escape in amazing South African settings: a dairy farm converted to a spa in the countryside; a cluster of log cabins built on stilts in a natural forest overlooking an expansive white beach; a surprisingly affordable large city guesthouse with sunsets to die for; and an iconic grand dame of a beachfront hotel. Fordoun Hotel & Spa
Flying into Durban, you can see why this part of South Africa is known for its rolling hills and its proximity to the warm Indian Ocean. This area was home to the infamous King Shaka, after whom the airport is named. Round thatched rondavels (huts) dot the terrain – a part of the Zulu way of life.

A trip to Fordoun Hotel & Spa offers a glimpse of the country’s ever-changing landscape as you drive approximately two hours inland, towards the Drakensberg mountain range (named for the dragon’s back it resembles).

Fordoun is a remarkable establishment. A renovated dairy, this family-run spa takes wellbeing to a whole new level on a farm reminiscent of the English countryside. The spa here has been given an innovative twist with the introduction of a traditional sangoma (healer); these people are alchemists of medicines from indigenous plants, with rituals that include the throwing of bones.

The healer at Fordoun is the remarkable Dr Elliot Ndlovu, whose indigenous garden includes plants that act as either stimulants or relaxants, and which are used by the spa. Dr Ndlovu believes in the preservation of Africa’s indigenous flora, in the strength of community, and in Ubuntu, the philosophy that the universal bonds of humanity are what bind us. His tales of ancestral apparitions may be challenging for some, but his unwavering belief in African traditional healing has endeared him to many former cynics, and led to consultations with Oscar nominees, a meeting with the British Queen and a visit from a former state president. Aside from seeing Dr Ndlovu, guests can experience the energy of healing through highly trained therapists within the tranquillity of Fordoun Spa. While my treatment had no spiritual aspect, I did enjoy the indulgence of a body scrub and massage using mud from a white mountain in the Drakensberg – a place of spiritual importance to the Zulus. My therapist also used compresses (herbs and oils in muslin), which I then took home to use in the bath.

Outside of the treatment rooms, sprawling Fordoun is a working farm with grassy pastures. The original milking pen has been converted into an indoor pool, and old farmhouses have been converted into guest suites with luxurious bathrooms, cosy fireside seating and summery verandahs. What’s more, the spa has a restaurant with the kind of high standards that make it a dining destination and not just an expected part of your stay. The food was exemplary, and included a flavoursome curry in a traditional African potjie (a lidded, cast-iron cooking pot with three legs that can be placed in an open fire). From Fordoun, guests can go on a cultural tour to enrich their African experience. 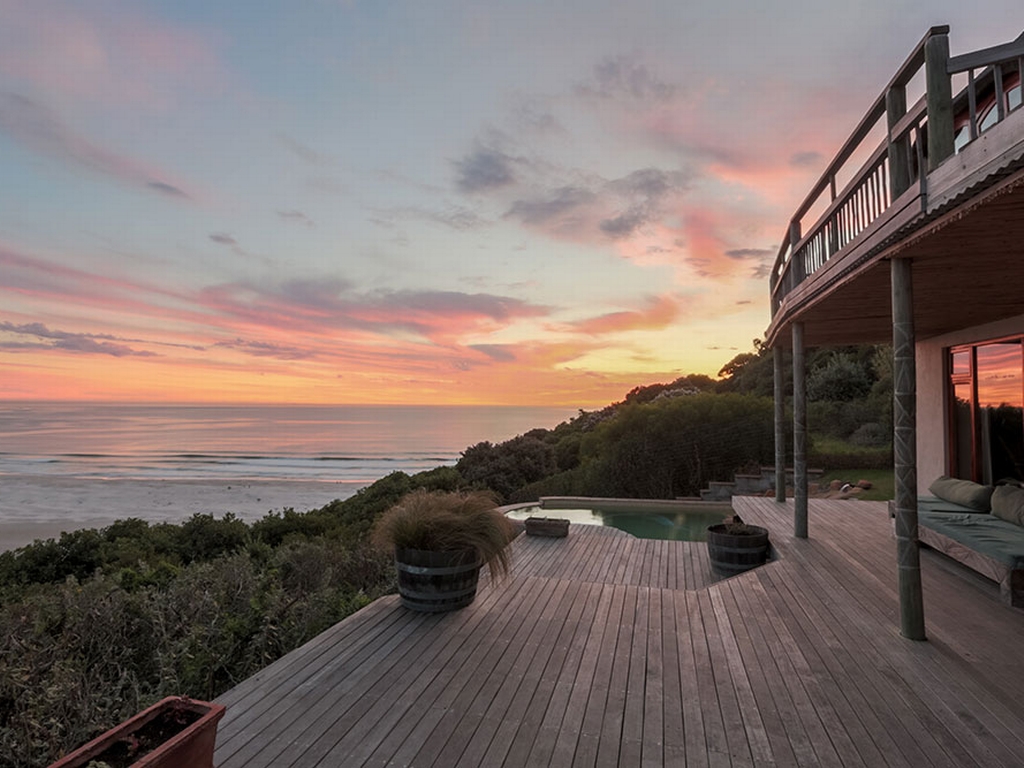 Monkey Valley Resort
Set in a 400 year-old Milkwood Forest, Monkey Valley Resort is located on the slopes of Chapmans Peak Drive. Overlooking the 8 kilometre Noordhoek Beach, few sights can beat a panoramic view of horses cantering beside the icy spray off the waves.

Private homes are scattered on the mountainside, in a village known for its relaxed community. The charming area includes a few vineyards facing the afternoon sun, as well as paddocks and stables along meandering little roads, a quaint village pub and some wonderful restaurants.

Monkey Valley Resort has been built into the forest of mature milkwood trees, in a way that preserves the stability of the environment. The accommodation is made up of a configuration of log cabins, thatched cottages and self-catering family units, set well apart from one another. The units are humble, but the views are breathtaking – including the one from the shower and bath in the glassed-in bathroom of our Crowned Eagle suite, which made lingering in the tub so very tempting.

We were served a wholesome and hearty breakfast, as well as ice-cold beers (not at the same time!), on the restaurant deck built into the trees and overlooking the 8km stretch of beach. A tree grows right through the pub, and at times flamingos, other waterbirds and whales can be seen in the sea and lagoon below. With real dunes of sand fine enough to run through the fingers, children can play for hours in this natural environment, with a gusty Cape wind blowing their hair across their cheerful faces.

Ocean View House
Cape Town buzzes in the summer, and it’s nearly impossible to find anywhere to stay that doesn’t break the bank. That said, with the favourable exchange rate, the Singapore dollar goes reasonably far in South Africa.

What a surprise to find that this website had fairly portrayed the expansive property on which Ocean View House sits.

Knowing the area’s high property value and the way houses are squashed onto small pieces of land on this desirable cliff face, I was gobsmacked to find Ocean View House sprawling generously over lovely gardens, with all rooms offering sought-after views. The Twelve Apostles mountains tower majestically behind the property, and a large tree with hammocks takes pride of place in the garden. Two gardeners tend to the indigenous flora, and the water-lilies and other fresh-water plants are beautiful.

With 17 rooms, there’s a wide selection of accommodation, and it’s refreshing to find such a location at a favourable price. This is one of the last properties on the edge of the urban area of Camps Bay and Bakoven. (Camps Bay and the Atlantic seaboard in general are renowned for bars, restaurants, clubs, beaches and sunsets to die for.) A sea-cliff drive through the nature reserve leads along the ocean shore to the famous Chapman’s Peak Drive, voted one of the most scenic routes in the world.

Just 10 minutes from Table Mountain, and 15 minutes from the city centre and vibrant waterfront, this large guesthouse is a terrific location for anyone visiting Cape Town. The Oyster Box
I recently took my South African-born grandmother to this beachfront hotel north of Durban to celebrate her 85th birthday – what a perfect place! She regaled me with tales of the iconic lighthouse, while the opulence of The Oyster Box itself took her back to her youth of high teas and dinner dances.

Today, a pianist still plays in the Palm Court while china cups are clinked, and fruit skewers are served to guests lounging on red-and-white deck chairs beside the pools. The quirky brass Dolphin Bell still ignites excitement as guests ring it when they spot dolphins frolicking in the Indian Ocean breakers.

This is a charming hotel that is mature and grand, yet fresh and engaging. I have visited here on other occasions with my young family, and they’ve been equally impressed, delighting in the free-flowing milkshakes, poolside games, and easy access to the beach below to play on the sand and explore the abundant sea life in the rocky coastal pools.

The original cottage, “The Oyster Lodge”, was built on these grounds in 1863. Made of Burmese teak, corrugated iron and reinforced concrete, it was originally used as a navigational beacon and later as a tea garden and then a restaurant, before opening as The Oyster Box Hotel in 1954, on the site next to the lighthouse.

In 2006, Stanley and Bea Tollman of Red Carnation Hotels purchased the rundown property. It was their vision to restore and develop the hotel to its original glory; they wanted to keep the authentic period touches while bringing it into the 21st century. The hotel we see today is a fitting tribute to their vision. While a number of the original features remain intact in the new structure, the hotel has, for the most part, been rebuilt: from the grand revolving door at the entrance, to the reception and foyer with its terrazzo tiles, familiar wrought-iron balustrade and original, inlaid hand-painted tiles and friezes. The recognisable black-and-white checkerboard floor has been re-instated throughout.

The lighthouse on Umhlanga beach was completed in 1954. It stands guard over some of the most treacherous waters of Southern Africa, warning ships of hidden dangers, but also welcoming ships sailing into the safety of the Durban harbour. The circular tower, painted white with a red band at the top, rises 21 metres above the beach. Umhlanga Lighthouse has never had a keeper; The Oyster Box Hotel, originally the first beach cottage in the area, has always acted as its official warden and custodian. In fact, in the days before the lighthouse was built, the red painted roof of the hotel served as a beacon for ships.